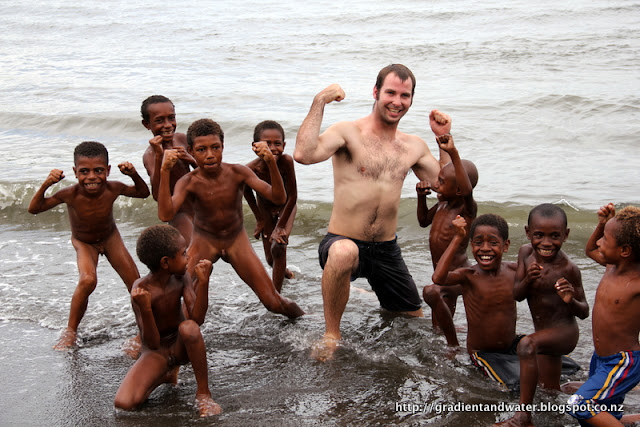 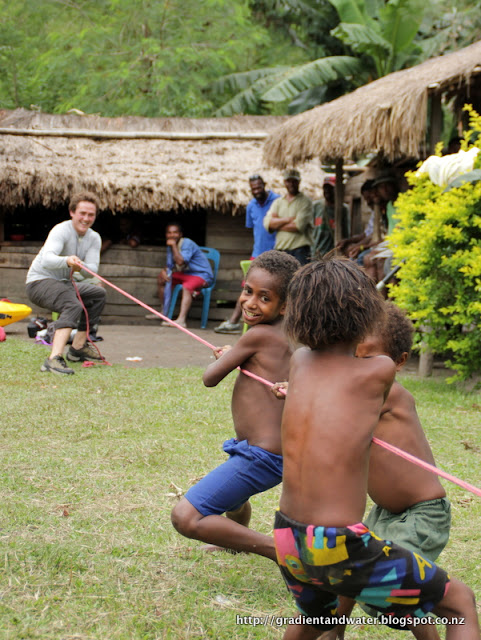 Well, we're back in action and are heading back to Papua New Guinea! In 2011 Barny Young, Shannon Mast and Myself completed a highly successful expedition, bagging eight First Descents but leaving some unfinished business... the Grand Canyons of the Chimbu. This river took us by surprise as we thought it had been previously been paddled by a raft in the early 90s but after reaching the first gorge below Banana Market we knew this wasn't true. A boxed in canyon with a stacked series of Class V rapids. Once we began portaging (walking or maneuvering) around this series of rapids some locals appeared out of the jungle and offered to carry our boats back up to the top, like they had with the rafts the attempted it in the past. We pushed on, leaving some paddle-able white-water for another day until the ferocity relented. After putting back on we paddled some full on class-V until we were confronted with yet another boxed canyon. With fading light we had to retire from the river with our tail between our legs, broken and beaten. But we'd be back. 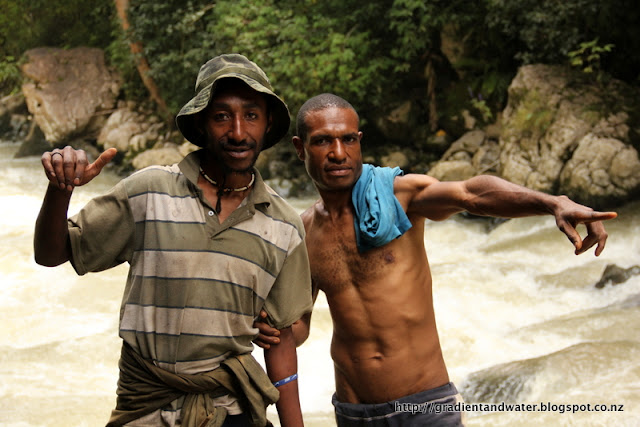 the boys who offered to hike us out 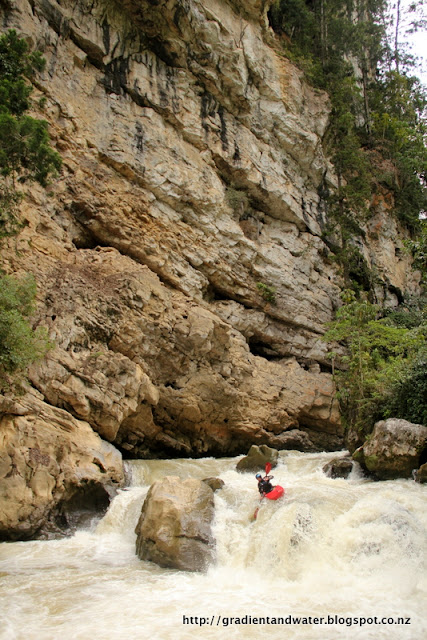 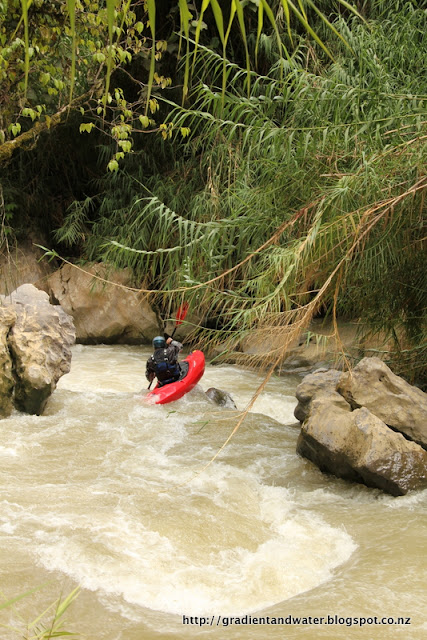 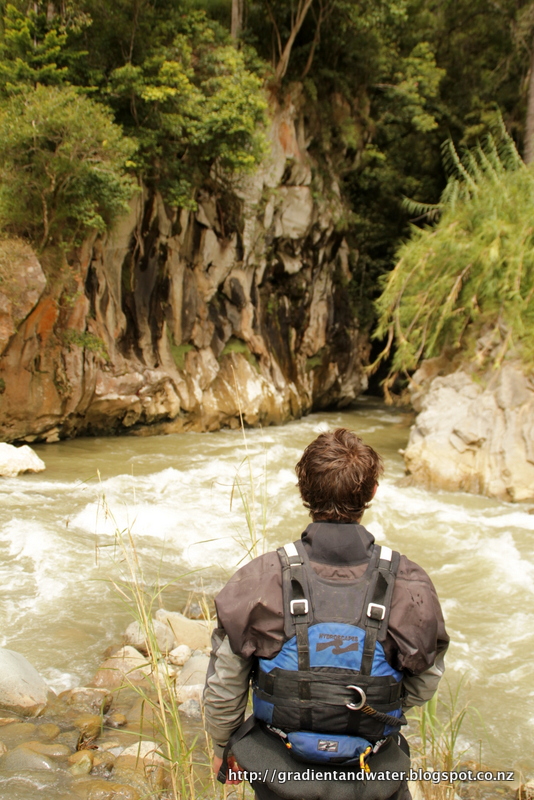 Looking at the Sikewage Gorge, forcing us to hike out and come back another day.

Four days later we had another attempt at the Chimbu, this time taking the time to climb down and scouting the gorge from within. We figured we'd paddled the first two rapids, portage the third and then climb out and over where the whole river went underground. Putting back on and continuing down through the 3 remaining gorges. This was not to be. Once the three of us made it into the gorge Barny stepped up to fired the first full-on rapid. After 'whiteing-out' in the entrance Barny got caught up on a inconspicuous boil. Fighting for a long time, Barny finally succumbed and exited his kayak. Going deep for 28 seconds (on video!) and then washing through the rapid we wanted portage and then managed to get himself to the bank before the river went underground! Barny's boat, however, was missing. After a few hours of trying to find whether it was in an undercut or in the subterranean river system, we had to cut our losses and get out of the canyon before dark. Even more broken and beaten than our previous attempt, we were left standing on the road above the canyon. Gazing down on some of the most enticing and intimidating white-water we'd ever seen. 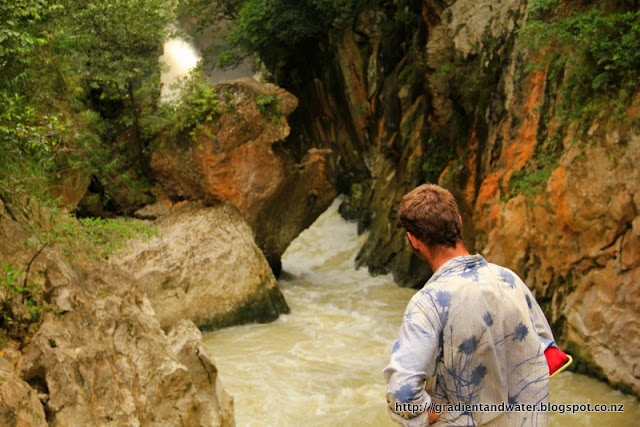 Barny scouting the rapid that would get him 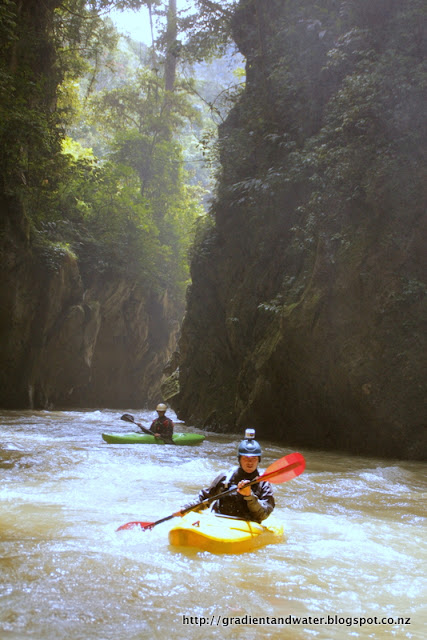 Shannon and I entering the Sikewage Gorge 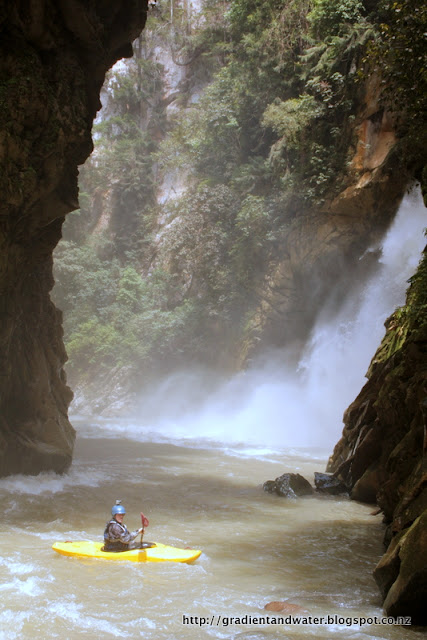 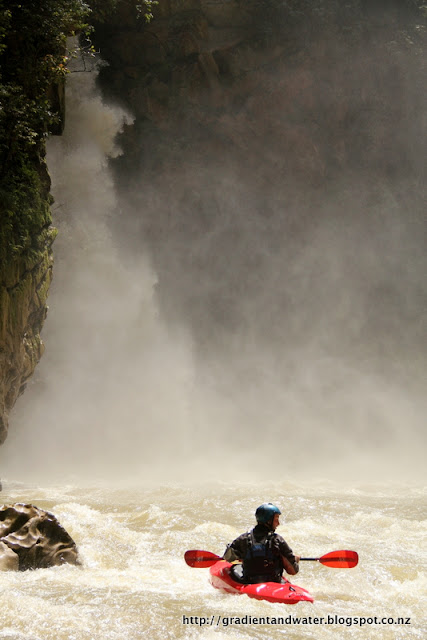 Barny about to fire 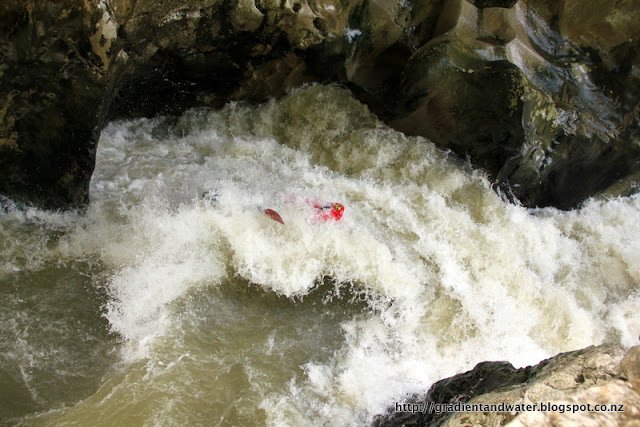 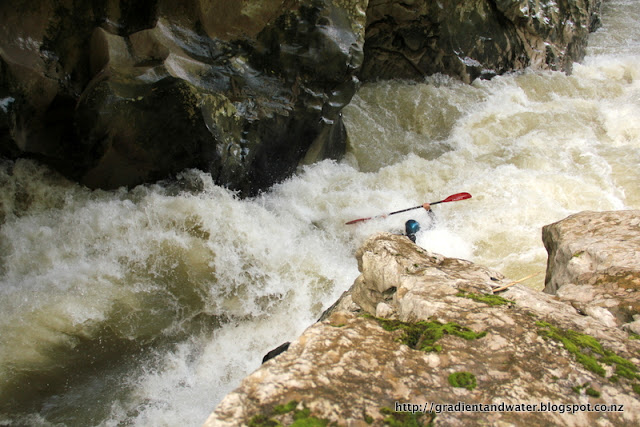 During our expedition de-brief we all felt we had achieved great things in Papua New Guinea, but also felt that the Chimbu had beaten us. Something that didn't sit well at all. During 2012 things were good but the Chimbu was in the back of my mind. And an email from Sport New Zealands Fiona Ramsay, announcing applications were open for the Sir Edmund Hillary Expedition Grant, was the catalyst to get things going again. Obviously not being able to rely on getting such a prestigious award two times in a row, Barny and I am worked as hard as we could to raise funds with our annual white-water calendar and various other money spinning plans. But we were coming up well-short. I spent a large amount of time spent on a grant application with Sport NZ with some hope that our previous efforts might give us another chance at a grant. Once we got short-listed our hopes were heightened but we had to cast it out of mind, or we could have been let down by not getting it. Fortunately for us the stars aligned and Sport NZ seen the value of our expedition and would make our trip possible by contributing to our expedition. 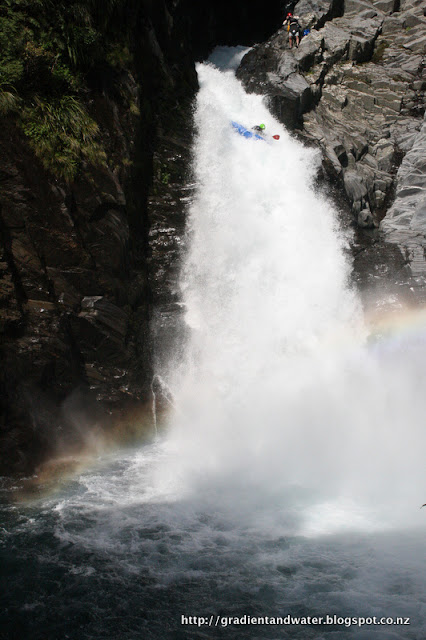 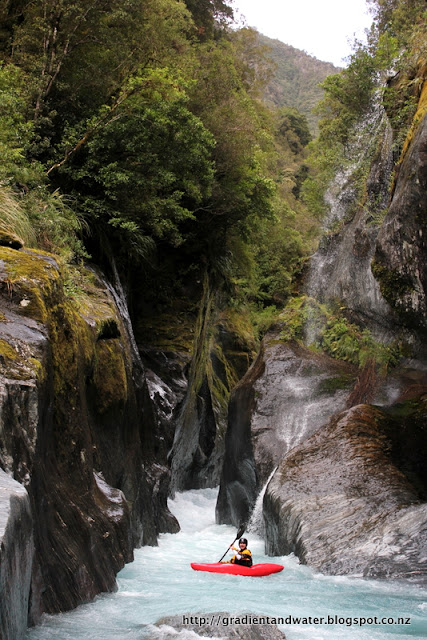 Matt Coles coming through 'Carnage Gorge' during a
high flow run down the Kokatahi River. 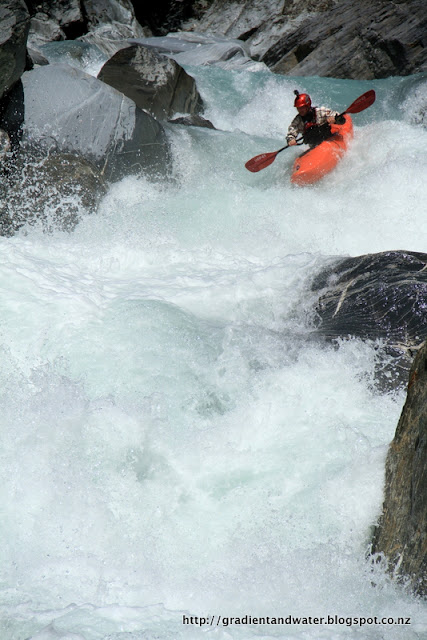 Barny Young routing a steep section on the
Upper Whitcombe. 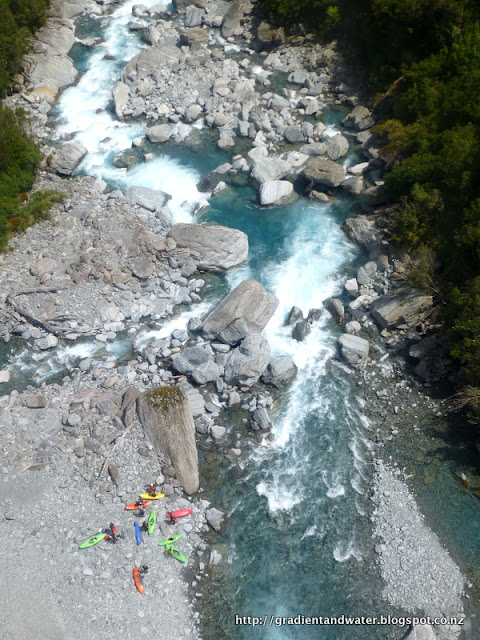 Our initial plan was to have the original crew of Barny, Shannon and Myself for the expedition but unfortunately Shannon was unable to take-part. So we were on the hunt for a mate or two to fill the HUGE shoes of Shannon Mast. And who better than his partner in crime, Matt 'Wild-Bill' Coles. But at the exact same time our boy, Ari 'The-Curry' Walker, also expressed his genuine interest. How to pick between two great candidates... well we didn't know. So both are coming!

Leaving May 3rd, the four of us will travel to PNG with the hopes of conquering the Grand Canyons of the Chimbu. One of the most testing pieces of white-water any of us will ever face, in one of the most hostile countries in our present day. Our preparations are coming to an end, our flights are booked and we're as eager as ever. Its the final count-down to what we hope will be the experience of a life time! 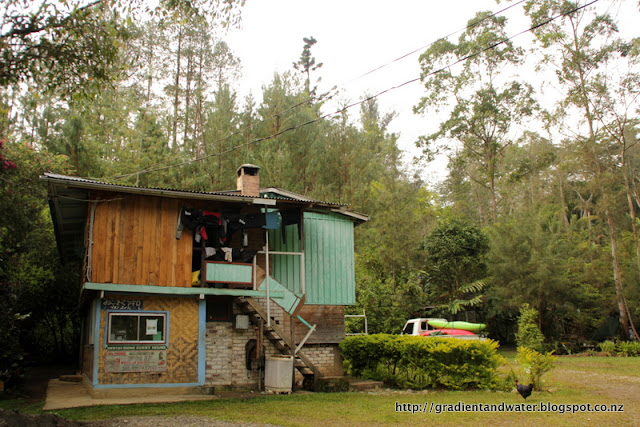 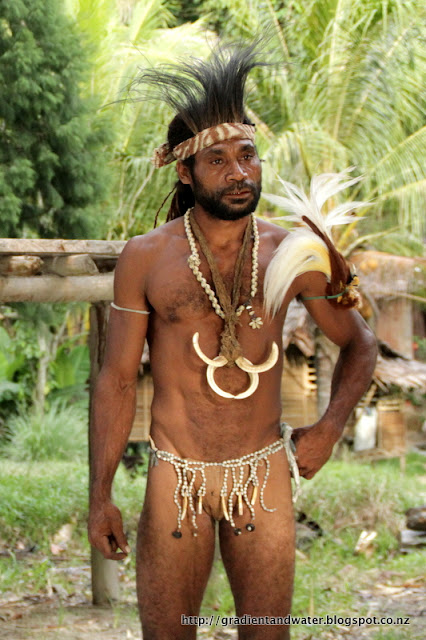 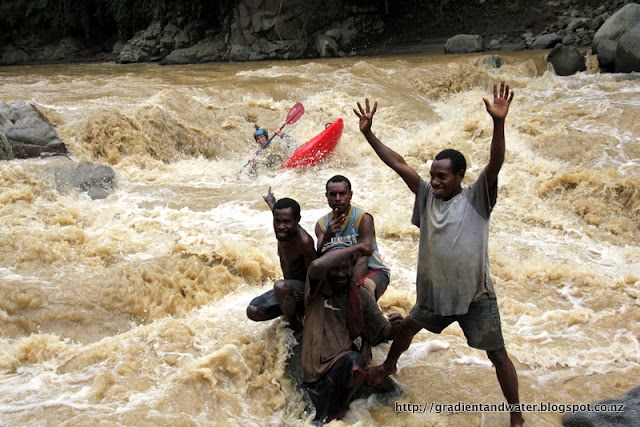 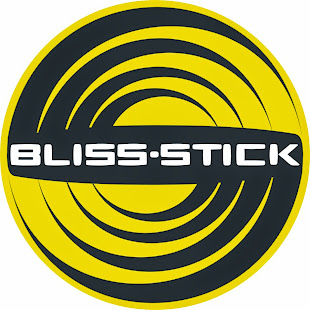 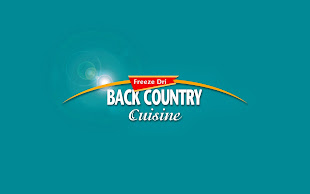 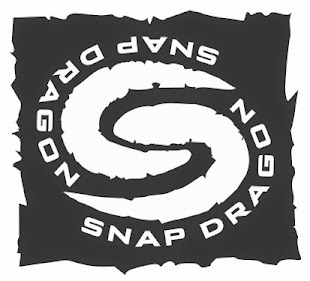 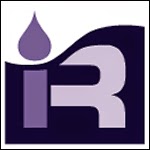